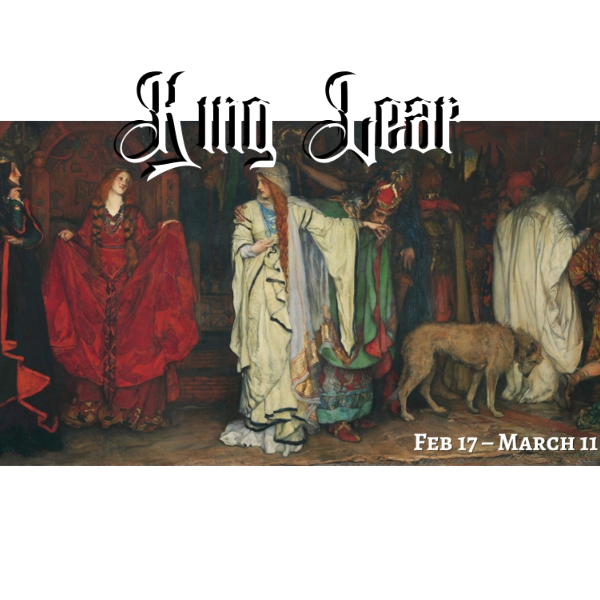 An old, arrogant ruler, King Lear, decides to pass on the crown, bur first tests and divides the kingdom amongst three daughters. In a fit of rage, Lear banishes the youngest daughter Cordelia. The two eldest daughters of Lear reveal their true natures and betray his trust. Lear’s world and reign collapses with tragedy for all.

View the biography for the synopsis of the show and how it fits into our season theme.

Masks are no longer required. You are still welcome to wear them for your own comfort.

For special seating needs please use the CUSTOMER NOTES section after you enter your credit card info.

When purchased, you will receive an email confirmation from The Helen Borgers Theatre, subject line: SeatEngine: Order #

Synopsis: King Lear, ruler of Britain, is set to stand down and abdicate his kingdom and divide it amongst his three daughters, but only after a test. The test is a test of love, and he asks his daughters just how much they love him. The two eldest daughters, Goneril and Regan, both flatter their father with flowery language, but Cordelia, remains quiet. Cordelia then leaves to live with the King of France, who wants to be with her regardless of land.

As Lear realizes the banishment of Cordelia and giving the land to Goneril and Regan was the wrong decision, the latter daughters start to erode Lear’s remaining power, and he goes insane. Lear flees during a thunderous storm with his fool and the nobleman Kent in disguise. Edmund, the illegitimate son of Gloucester, an older nobleman, tricks his fake father into believing that Gloucester’s real son is trying to kill his father. Edgar flees and hides as a beggar named Poor Tom.

Gloucester sets out to help Lear, but Regan and her now husband Cornwall, accuse him of treason. They blind him and leave him to wander the heath, where Poor Tom helps him along to Dover. Now in Dover, Cordelia is leading her French Army to save her father Lear. Edmund seduces Goneril and conspires to assassinate her husband, Albany, who is beginning to understand Lear’s fear.

As Gloucester contemplates suicide, his son Edgar saves his life on an imaginary cliff. Edmund leads the English army onto the cliffs of Dover, and they defeat and capture Cordelia. Edmund and Edgar fight to the death. Edmund dies, as Edgar learns of the death of Gloucester. Regan is poisoned by Goneril who then reveals her conspiracy to Albany and kills herself. Cordelia is then executed in prison, which destroys Lear, who dies of a broken heart. The remaining Albany, Edgar, and Kent, in deep sadness, take over rule of the country.

The Argument: What unites us in this existence is a Celebration of Life, Grief, and Death. How can you prepare the ones you love for when they lose you? A powerful royal family’s reign and legacy is thrown into chaos as power and greed poison and lead them to a legacy lost. The dream of a circle of life is presented at the beginning of the play, with Lear wanting someone to continue his legacy. In the end past faults are forgiven and family is reunited. Reconciliation is where this tragic tale ends, with the survivors left to pick up the pieces, to somehow start a new beginning and carry on the kingdom.